Sometimes there is a moment for risky creativity. When that time arrives, make sure you remember this key principle:

Courage in your creativity should not alienate,
but elevate the space for God to speak.

This weekend we tackled a topic in our “You Asked For It” series rarely if, ever dealt with in the church. The question “Is suicide the unforgivable sin?” was selected by our church as one they would like to most ask God. Our best guess on the reason for this is the large amounts of Catholics who attend and would be wrestling with this question.

So how do you program a service around this difficult subject?

We started by having a conversation around creative courage.

Too often creativity functions OUTSIDE, ABOVE, or BELOW
the focus of the worship experience

Outside: Creatives pay little attention to the theme or the temperature of the church at the moment. Ideas are forced, irresponsible, or irrelevant to the context. The creativity may be stellar, but if it doesn’t communicate or it alienates, it falls short.

Above: Creatives prioritize their art above the rest of the worship experience. That moment is propped up and overshadows the more important aspects of the message / theme that day. The “Ahhh” factor may be high, but the “Ah Hah” moment will be missed.

Below: Creatives put too little effort into enhancing the theme. They lean too quickly into easy routes (often called “low hanging fruit”) and don’t spend time discovering the last 10%. As a result, the creative is worthless and pointless.

For this suicide focused weekend, this perspective became important. Our desire was for the creativity to operate THROUGH the theme and worship experience.

We did not want to shoot below and leave our communicator on an island to handle the difficult subject. Our first decision was to NOT avoid, but lean into the subject matter. In conversation with our main communicator, we knew the question itself would be the first portion of the message, but the rest would focus on 1) those contemplating suicide and 3) those who have been impacted by someone’s suicide.

With this in mind, we decided to make it personal. Very personal.

We did this in two specific ways:

First, we contacted Holly Chamberlain who had attended our church and tragically her 15 yr. old son had taken his life two years prior. She had been working as an advocate to help others avoid this same path. After explaining to her the direction, she agreed to share her story, her struggles, and the hope she was living in every day. Initially the plan was to do a full live interview, but as we processed (over a period of days) a last minute decision was made to film and edit the first part of her journey covering the actual events surrounding the suicide. This would allow the live interview to follow and focus on “life after death”.

We try to avoid these last minute projects when we can through planning, but often times the “Third Way” wins out and our team (in this case Dave Cowan) leans in and makes it happen. As it played out, we couldn’t imagine doing it any other way. It allowed us to cover the “brutal” aspects of the story in an edited fashion.


Secondly, we selected a song to put a period on the moment. The song was Never Too Late by Three Days Grace. How did we find it? Just lots of leaning into various sources and listening to lots of music. The song has a subtle hope to it, but hits the subject head on. Our choices was to do the song in an acoustic fashion in order to lessen the “in your face” effect and keep people in the moment. This song would follow our live interview segment.  The lyrics spoke directly to the reality of suicide and the plea from a friend in an effort to save someone close to them.

The flow went from message, to the video, into a live interview that we transitioned to as an “interview set”. From there we finished the moment with the special song.

Live Clip of Song from Service

Note: We pre-rehearsed the interview on Saturday following our music rehearsal. This was very important and is a must to make sure that it happens in a reasonable amount of time while still covering the important topics. The rehearsal allowed us to establish key talking points, flow and conclusion. It is a must and can be done while still maintaining the authenticity of the moment.

In the end, the reaction and moment was strong. Lots of powerful conversations in the lobby and throughout There was space for God to move wherever someone found themselves relative to this topic. The message leaned hard into hard and grace. The personal, poignant elements worked alongside the message to enlarge the impact.

Don’t be afraid to lean into risk at key moments. But do it prayerfully and purposefully.

Let It Be Known 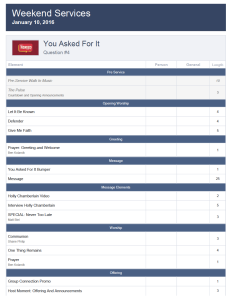