Churches talk vision on seemingly a regular basis. Far too little, however, is this “picture of our desired future” communicated with laser focus to the wider church community. With the summer upon us, we made the decision to set aside an entire weekend to focus on this, lay out this oncoming vision and deliver a call to action to our church. Our creative team engaged deeply in this process of covering the morning with a combination of grabbing attention, initiating celebration and a call to action. There were a number of elements that we weaved together to create this experience.

Our theme was centered around the idea of “Deep and Wide”. Born out of conversations with our senior leadership, the vision was to be a church that would go deeper in our discipleship and wider in our impact.  For us this was approached from a 12-18 month perspective and focus. Our conversations led to the following approach:

Keys:  Using Matthew 16 as the focus, we talked about the idea of having the “key” to expanding the kingdom. Our hope was that everyone would look at their own lives and look at what they could unlock in a deeper and wider way. As is our style, we order 4000 small skeleton keys and handed them out at the doors to every individual. This element would also weave its way through the message and application.

Opening Attention Grabber: We reached back and reworked an element that had been effective at Christmas to open the service. It’s a simple whisper concept with text on screen. As people are coming in, still moving and finding their seats it’s a great way to focus everyone. This is an instance where “silence is our friend.”

It also allowed us to set the tone for the day early on and get people tracking with us without revealing too much. It was a quick element to produce, but effective.

Opening Song: The song Salvation’s Tide (Kristian Stanfill) served as our opener. It was accompanied by a picture montage highlighting numerous moments from The Crossing over the past two years. Using our multiple screens, it added a pop of excitement and celebration to kick off a day of vision.

Remembering Stories from the Journey (The Trunk Element): Our message setup element centered around a small girl (Ava Grace) who we selected to drag a large military trunk on stage. As she was seated, she opened the trunk and began removing items. It was filled with significant items from the recent history of the church, think time capsule. Every couple items, a frame was held up with a picture of a recent featured story of life-change. We then rolled to quick 30 second highlight from that story. The idea was remind people of how we are constantly discovering Jesus and the journey together. The last couple centered around our future as they spoke of our future campus coming to their neighborhood and what it would mean for them.

A couple challenges we had to overcome:

> The previous videos all contained a musical bed. The raw files were unavailable so each video highlight had a different bed. It worked, but concerned us that it would be choppy. We tried to mitigate it by creating a live underscore that complimented each video to make the transition as smooth as possible.
> The element contained a live element and a young child. Those are two things that generally raise the red alert for us. Our live element director, April, took the lead on finding, auditioning, and rehearsing our child actor, Ava. It went VERY well, but the moment required some clear work and prep.
> Props had to be gathered. In addition, a screen shot was pulled from each video, then photo printed and placed in frame. This would serve as the transition to the video piece. Communications Dept. took the lead on this part of the element.

Spoken Word: We decided to close the message (and the service) with a challenging spoken word. Dominique, who serves as our graphic artist, worked alongside our team to formulate a compelling moment built around the idea, “this is the church that we see”.  We shot this piece on video in 5-6 locations around the valley providing a backdrop. The last two lines of the piece were then delivered live on stage.

The entire day contained much more transitions and elements than normal. But our goal was to provide a compelling experience that would stick in memories and move towardsto action.  We integrated the “key” idea back into the service through an exchange at the end of the trunk element with Ava and Shane before he began the message.

Lord I Need You 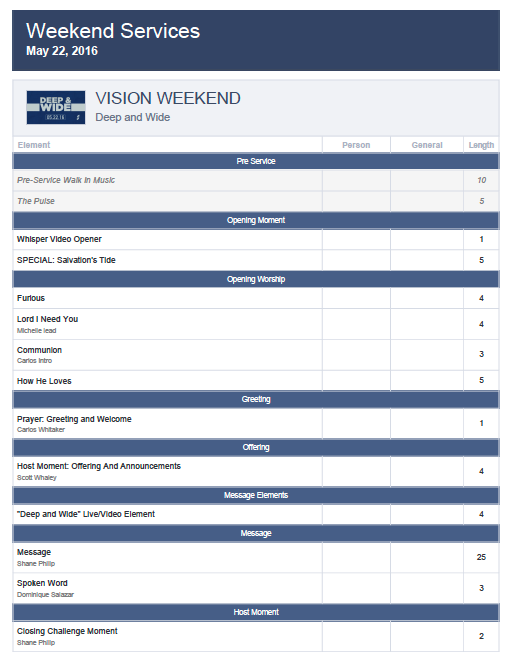 This week was a powerful and strong Sunday as we had the opportunity to highlight the power and legacy of lifelong marital commitment. It turned out to be exceptionally strong. We were addressing the topic of “Fighting for your Marriage.” In our creative team gatherings we had circled around several ideas – whether to do a funny video of a couple not getting along or trying to foster a marriage in the midst of the chaotic environment. However, one of our volunteer leaders, April Holladay, kept emphasizing the power telling the story of someone who had been marriage 60 years and the learnings that can come from hearing from a couple with such longevity.

We landed on featuring one of our own pastors, Tim Coop, and his wife Sandy. They have been married for almost 56 years. Not only had they been through so much in their time and have the wisdom to speak with so many, Tim has been an incredible advocate for marriages here at The Crossing and in his various ministries throughout the years. They became the perfect choice to feature.

We decided to add the last 10% by intermixing their story with the song, Forever Like That by Ben Rector (who has become a favorite of our creative team). Matt Biel and our team did a fantastic job of performing the song and intermixing the video with the tune.

Every time we mix song and video it comes with it’s own set of challenges. This time we had to accommodate a the intro of the song, which was very long. Through the rehearsal we were able to figure out when to start the band so they would start singing when the first video ended. Each time there was timing needed to make the moment seamless.

April Holladay, one of our core creative volunteers, worked hours coordinating the filming with the Coop’s. This was important as Tim is currently battling cancer and has been through a difficult period. Dave Cowan did a great job putting the piece together including great black and white photos from their lives.

The entire piece was rehearsed on Thursday evening and April put together this plan  so that our Sunday volunteer team could execute team the cues as they needed to happen. I would recommend to come up with a plan similar to this if you choose to do a video/song mash up.  When executed well…it rocks.

At the end of the day, the moment was extremely powerful and moved the audience. The telling of stories  It turned out to be one of our strongest elements we have done all year.

Here is the video:

O Come To The Altar